skip to main | skip to sidebar

What you can do with a hundred bucks.

I regularly get bike dealers traders and scrappers, offering me older English bicycles. It seems other bicycle mechanics/rebuilders don't want them. You can easily distinguish these bikes by a few things. The color, frame design, headbadges, 3-speed hubs (often, but not always.)Many of these bikes were made in the same factory in England. You can find such names as, Dunelt, Phillips, Hercules, Royal Scot and Humber.The most popular of all at least in the US, is Raleigh.
I picked one up at our recent swap meet, for $50 bucks. The frame was pretty clean as were the fenders. The hub needed rebuilding but other than that, it was a pretty cheap deal.
A couple of friends invited me to breakfast the other day. They were both riding cruisers and dressed well. Not wanting to be the odd one, I pumped up the tires on the Raleigh, did a quick brake adjustment, raised the saddle and took off with them. We took a scenic neighborhood route, as opposed to the through streets.It was a nice morning and taking it easy on a cruiser felt so natural. We took a scenic route on the return trip as well. Upon returning to the shop, I decided to make the cruiser mine. Besides completely rebuilding it. (Which I've still yet to do). It needed a few personal touches. I hate a street bike with no bell, so that was a no-brainer. Lights, that's a given. In fact I believe only a moron would ride without lights.
What this bike needed however, was something personal.

I recently picked up a few wine crates from a local wine shop. Most shops have to dispose of these somehow so, they can be purchased for free.99 Which is a fabulous price. I've seen folks do really creative things with these crates in the past, but I'd only used them as storage bins. How silly of me. So finally, my brain powered up and I came up with this: 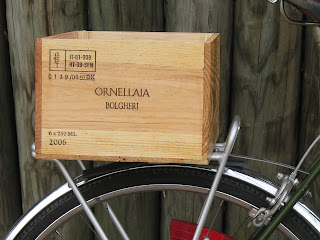 A few lag bolts, some shellac, a couple of rubber mounts, some wood quarter round to reinforce the corners and there it is.

I needed to strength test the box so I hopped on and road the bike over to Lincoln Park. I had a friend that owed me a few bucks so, I could make it a dual purpose trip. I took Cortland ave. east to Armitage ave. Cortland, like many Chicago streets, has it's share of rough patches. A good test for the design. The box never rattled and when I reached Clark street, I shook it to see if maybe it was loosening. Nothing, as solid as when I first mounted it. That felt great. 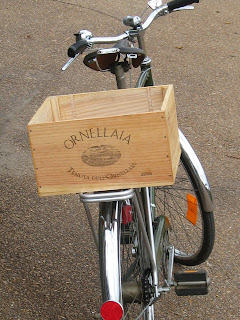 The friend I was to meet was working over at the zoo, so I figured what the hell. I never go there, not really a fan, but hey I'll check it out.

They have this zoo lights festival, that's opening after Thanksgiving. There must be over a trillion lights all strung up around the place. Every goddamn tree, is covered in wire and lights. 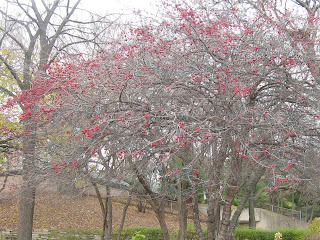 As much as I think it's silly, It's kinda cool. Something to do on a fall weekday. There was almost no one around. Just a few nannies and couple school groups.
I'd say check it out for sure. Try to avoid the animal exhibits. Most of the animals, thankfully were indoors. That would figure, since many of them are from Sub Saharan Africa, whose climate is vastly different from lakefront Chicago. Sad really. I took this shot of the Zebras that happened to be out. They looked bored to tears, poor beasts...They just stood there, looking sad, shit... 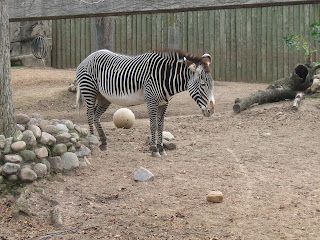 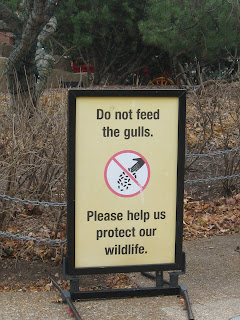 "Help us protect our wildlife". Tough to do since they are no longer in the wild.
What's that? Captivity you say?

After tooling around for about 45 minutes, I finally found my friend. This is him below. He's one of the guys hired to string all those purdy lights. 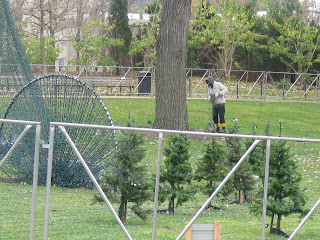 After meeting up with him, I figured time to get out this pretty, but sad place.
I jumped back on the Raleigh and headed west. What a cool bike, hipsters take note. That thing on the bottom is called a kickstand. 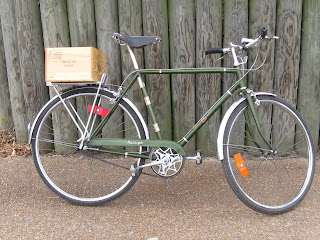 All this bike plus a little dress up, for about a hundred bucks.
What's really sweet about the rear wine crate? What you can bring home in it. 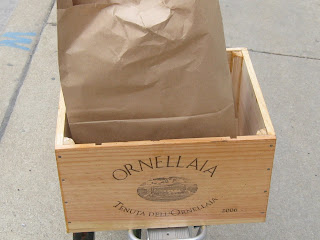 Nice, a toast to Raleigh cruisers! 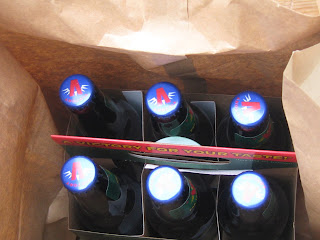 Posted by Lugschicago@gmail.com at 11:16 AM